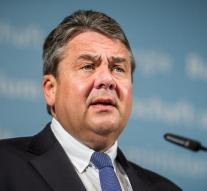 rostock - Germany and the European Union must 'be blackmailed under any circumstances, '' Turkey, says the German Vice Chancellor Sigmar Gabriel.

'It's up to Turkey whether or not a visa liberalization comes, '' he said Monday.

Gabriel responded to statements made by the Turkish Foreign Minister Mevlüt Cavusoglu. Who had threatened in an interview that Turkey refugee agreement with the European Union if Europe blows up not later than October lifting visa requirements for Turks.