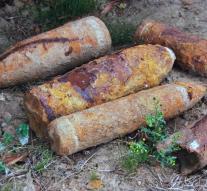 hannover - As timing bombs they are underground- in rivers, under highways, in residential areas. Experts assume that about 250,000 copies of the bomb carpet that allied during the Second World War led Germany did not explode due to a technical failure.

Ten tens of thousands are still a drowning hazard in the soil, sometimes meters deep but also close to the surface. The Ruhr area and the Lower Rhine, as well as major cities like Dresden, Hamburg or Hanover are the most feared. In the latter city, Sunday, 50,000 people had to leave their house.

Blindgangers are mostly discovered in construction work, but also by analyzing historical aerial photographs. German experts believe that detecting and bombarding bombs will take several decades. The explosive clearance service staff determines if they remove the ignition or cause the discovery to be blasted. That is a dangerous job, which has cost tens of lives over the years.