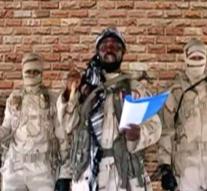 karlsruhe - The German judiciary has arrested a possible member of the Nigerian terrorist movement Boko Haram. It is the first time that a suspect of this terrorist organization has been detained in Germany.