Home / World / Germany is going to recover army from Turkey 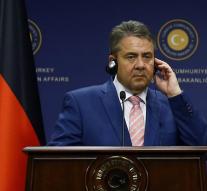 ankara - Germany is going to retrieve its troops from Turkey now a last attempt has been made to resolve the dispute with the government in Ankara around a visit ban for German parliamentarians on the air force base Incirlik. That is what German Foreign Minister Sigmar Gabriel said in Ankara on Monday after consulting his Turkish colleague Mevlüt Çavuşoğlu.

The Erdogan government does not want German parliamentarians to visit the 250 men in Incirlik to assist in the fight against IS. According to Turkey, Germany is behind everything that is against Turkey. Germany granted asylum to Turkish officers accusing Ankara of being a member of the forbidden Gülen movement.

Gabriel says that his country now has no choice but to recall its troops from the air force base.