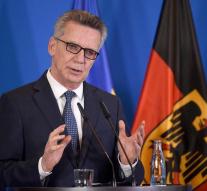 - The German government has the radical Salafist association Die wahre Religion (The True Religion- DWR) prohibited. The police did Tuesday morning on 190 pitches raids in homes and offices of the association and its members. The group tries to interest over the distribution of Korans in German city centers people for its radical Islamist ideology.

Interior Minister Thomas de Maiziere said that DWR rejection of democracy duty of Muslims states and divides the world into two camps: 'true' Muslims against infidels. It calls for fight against the constitutional order in Germany and glorified the armed jihad terrorist groups.

The Minister stressed that the ban is not directed against the propagation or spread of the Islamic faith, but against the abuse of that religion to propagate extremist ideologies and supporting terrorist organizations.