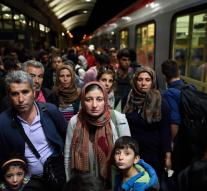 - The official forecast of 800,000 refugees who come to Germany this year, is probably underestimated. Our neighboring country registered so far already 758 000 asylum seekers, the Interior Ministry announced in Berlin Thursday.

Among the refugees are mainly Syrians, Albanians, Afghans, Iraqis and Kosovars. Never before have so many refugees arrived in Germany and it is expected that this number may rise to a million and a half million people.

However, the Interior Minister Thomas de Maiziere insisted on its original forecast. He did it because a new prediction can be viewed as a " invitation to come to us. I do not want to give such a signal ".