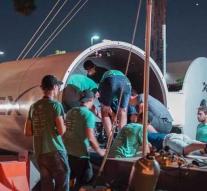 hawtorne - Students at TU Delft have failed to win the Hyperloop Pod Competition from Elon Musk for the second time. The German WARR Hyperloop of the technical university of Munich set a new speed record with 457 km / h and went more than three times as fast as Delft.

Of the total of eighteen teams, three were eventually allowed to make a real run in the Hyperloop tube on Sunday. Just before 9:00 p.m. Dutch time the team from Delft drove their pod first with 142 kilometers per hour through a kilometer-long vacuum sucked tube.

That competition run did not go according to plan. At the first countdown, the pod refused service. A few minutes later I succeeded, but witnessing the first reactions of the team in the stands, the result was disappointing. The Hyperloop Team later said that it hoped to go further and faster. It wanted to make a serious attack on the record of 384 km / h that was in the hands of the team of Elon Musk.

The German students did succeed. They also won in April 2017, with a speed of 323 km / h. Now they did more than 130 kilometers per hour on top of that and improved the old record of Musk.

After a week of testing, the Delft team experienced serious software problems. Fortunately, the Hyperloop team succeeded in circumventing the problems and making two successful test runs in the tube without a vacuum.