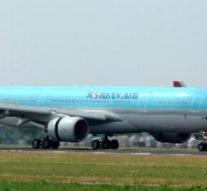 stuttgart - German air force jetists have seized a Korean Air Boeing 777 on Saturday night and forced to land at Stuttgart Airport. The aircraft was in transit with 211 passengers from Seoul to Zurich, Switzerland, when the radio contact was suddenly discontinued, a spokesperson said. After the plane landed, a technical defect was detected, police said.

The fighters break through the sound barrier with two loud bangs. On the emergency number, more than 250 phone calls from unsafe residents came in.

Friday evening, the German Air Force had already come into action when an Egyptian passenger plane on its way to Münster / Osnabrück did not report to the traffic control. The contact had already been restored before the fighters arrived at the device; The pilot initially had his radio at the wrong frequency.