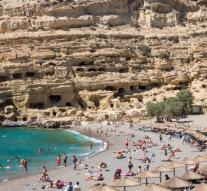 athens - Two Germans were arrested in Crete for theft of antique items. They are suspected to have dumped the coast for archaeological finds. The police searched the two seas on the high seas on Tuesday and caught antique gear and diving equipment.

The boat was dragged to the port of Chania, the man and woman spent the night in the cell and the Public Prosecution Service was turned on. In Greece, as in Turkey, Egypt and other countries, it is strictly forbidden to take out old objects or even ordinary stones from the sea.

Last weekend, six divers in the Peloponnese were detained in a shipwreck.