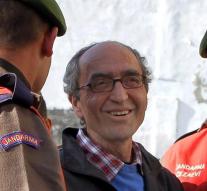 madrid - German writer Dogan Akhanli, who was arrested on Saturday during his holiday in Spain, may leave prison again. He is released under conditions.

According to his counselor, he has to stay in Madrid's capital.

According to lawyer Ilias Uyar, the writer, born in Turkey, was arrested at the request of the Erdogan government. Akhanli fled in Turkey from 1991 and currently lives in Cologne. He only has German nationality.

Akhanli has paid attention to the persecution of the Armenians in Turkey in his books. What he is accused of is unclear.

The lawyer said earlier that a Spanish emergency police had come to an Interpol emergency call. That was the reason to arrest the writer, born in 1957, at his holiday address in Granada.