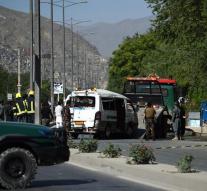 cabul - A German woman was killed in Afghan Afghan capital Kabul on Saturday night in an attack by armed men. That has been announced by the Afghan Ministry of the Interior on Sunday.

According to the Ministry, a Finnish woman was abducted by the attackers while an Afghan guard was shot. The attack was at the door of the guesthouse where the women stayed. A third foreigner would have remained unharmed.