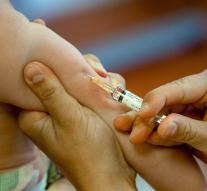 essen - A 37-year-old woman died in measles in the German city of Essen. The woman, a mother of three children, succumbed to the disease despite intensive treatment in a university clinic.

The health center in North Rhine-Westphalia announced Tuesday that 381 people with the disease were counted in this state, adjacent to our country, until mid May. That is a strong increase compared with last year, when a total of 28 cases of measles were recorded. The rural image also shows a strong increase. The woman is the first dead this year.

Germany, like the Netherlands, has a vaccine program for measles. According to the Robert Koch-Institut in Berlin, which on behalf of the government monitors the disease prevention, three people die on measles in a thousand cases. With the arrival of many migrants in Germany, the risk of infection with the disease has grown. Of the migrants, relatively few have been vaccinated.

The World Health Organization WHO has already warned that measles in Europe are gaining ground. In January, more than five hundred disease cases were recorded in Europe. The largest outbreaks occurred in Italy and Romania. The measles virus affects especially children. It nestles in the airways and causes red spots on the skin.

The Netherlands is achieving good results with only six cases of measles between January 2016 and February 2017, reports the scientific news site Scientias. The National Institute for Public Health and the Environment has no figures for this year. In 2013 and 2014 there was an epidemic. A seventeen-year-old boy died at the measles.