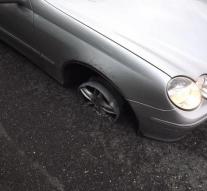 wattens - The Austrian police have taken a 78-year-old German from the highway driving a car without a left front tire. According to Austrian media the rim of the wheel was worn half when he was forced to stop on the A12 near the village of Wattens.

The police were alerted by other road users who were overtaken by the elderly driver and noticed that he had not left tire. The man told the police that he had noticed. He had to surrender his license and was examined by a police doctor.