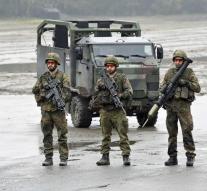 - The Bundeswehr will remain longer than planned in Afghanistan. That the Ministry of Foreign Affairs in Berlin Friday.

Following the United States remains the 890 German soldiers probably until 2017. Originally, the Bundeswehr mission in Afghanistan would end in the spring of 2016. US President Barack Obama announced Thursday that the 9800 Americans remain until the end of 2016 and their presence is then phased out . When the last soldier afzwaait from the US, is not yet clear.

In Afghanistan, staying a total of 13 000 NATO soldiers. The Germans are among those particularly at the place Masar -i- Scharif, in the north. Obama's decision to delay the withdrawal of the Americans, came after the Taliban recently Kunduz occupy the place unexpectedly and the Afghan army was unable to relieve the city on their own.

That only succeeded with the support of the Americans. The Afghan president has Aschraf Ghani has welcomed the decisions taken by Washington and Berlin.