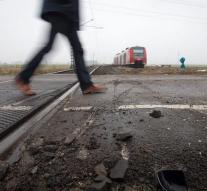 nienburg - An intercity Wednesday in Lower Saxony rammed a burning oak. It was blown down and landed on the overhead, and the tree caught fire. According to the German railways not fire hit on to the train, which transported about two hundred passengers. They were unharmed.

The double-decker was traveling from Norddeich to Leipzig. The bizarre accident happened near Nienburg, between Bremen and Hanover. Because the tree was left on the train, it took a long time before it could be towed.

The passengers were put on lorries to the nearest crossing where they could switch to buses.