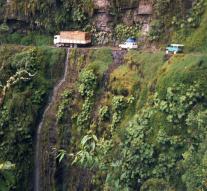 - One in Bolivia lost German tourist is found dead. Rescue workers found the 52- year-old woman in the tourist site of Cañon del Diablo (Devil's Gorge) near the town of Tupiza in southern Bolivia.

The newspaper La Razon reported, citing the prosecutor that the woman is starved. The already deceased woman was found in very bad physical condition in the area.

A hotel employee in Tupiza had the unaccompanied German on November 8 reported missing. Information about the woman's exact origin is unknown.