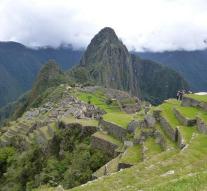 - A German tourist has come in Peru killed when he posed for a spectacular view of the world famous ruins of Machu Picchu. The 51-year-old man lost according to the BBC his balance and plunged into a ravine.

The tourist had Wednesday searched a locked area of ​​the mountain city to take the picture. Thereby ignored the warnings from German regulators and safety signs. It went wrong when the man in front of the eye of the camera Air indentation to give the impression that he flew.

Rescue workers have recovered the body of the German Thursday (local time). The remains of the unfortunate tourists are transferred to a morgue in the city of Cuzco.