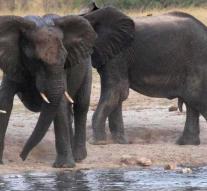 dodoma - A 49-year-old German woman was trampled by an elephant in a popular reserve in Zimbabwe, the moment she wanted to photograph the elephant. Her injuries were so severe that she died the same night.

The incident happened on Wednesday at the Mana Pools reserve. The woman would have stepped out of the car with whom she was on safari. That is unwise, warn authorities.

'We do not know what irritated the elephant, and gave rise to attack the woman,' said a spokesperson for the Zimbabwe Parks and Wildlife management.

Last year a Zimbabwean also died in a similar incident. He wanted to drive elephants to a clearing to be able to photograph them properly, according to the AFP news agency.