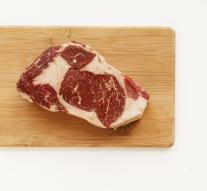 offenbach - Thieves in Germany this weekend stolen three tons of meat from a shop in Offenbach-Hundheim, in Rhineland-Palatinate. The prize is worth 40,000 euros, police said Sunday.

The perpetrators struck in the early morning of Saturday increasing. The meat was packaged frozen and vacuum, which made simple theft. According to the police, it is not the first time that the meat market is a victim of theft. Three years ago there was already a lot of meat stolen.