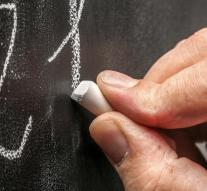 - He left detention a few students, and therefore is a German teacher Thursday in court. The accusation: deprivation of liberty and assault.

The teacher works at a high school in Kaarst, near Düsseldorf. He had given his class imposition last year. The students were from the classroom only if they were off. He then went demonstratively sitting in the doorway. When a boy still tried to come out, he stopped him.

The students called the police, who put an end to the imposition. By stopping the pupil, the teacher also guilty of abuse, according to the prosecution.