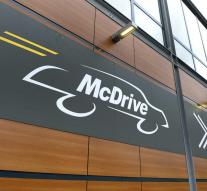 stade - A 18-year-old German took a day after he got his driving license, the concept of drive-in a bit too literally. Instead Stade (Lower Saxony), he stormed into the checkout area of ​​a McDrive, with big damage. An employee of the restaurant was wounded in the eye by flying glass splinters.

By unknown reason the car the teen went suddenly to the left instead of straight ahead. According to German media became the novice driver and his 17-year-old passenger in shock from the crash. The teen may be eligible for license-service training police said that the damage estimated at 12 000 euros.