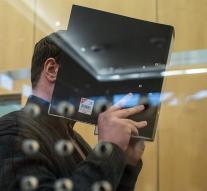 - The German Nils D. (25) turns out to have been a member of the secret police of Islamic state in Syria. In the coming weeks he stands up in Düsseldorf alleging membership in the terrorist organization.

D. shortly after the bloody attack on the editorial board of the magazine Charlie Hebdo in Paris, which left twelve dead, arrested by a commando team in a home in the German town of Dinslaken. He has already made a confession. Abu Ibrahim, as D. called himself after his conversion to Islam, was between October 2013 and November 2014 in Syria. As a member of the secret police in Manbij, near Aleppo, he knew about the torture of prisoners to death followed.

He also called himself arrested deserters and spies. He had witnessed an execution. Atrocities he would never have committed. D. ended up regretting his choice after his cousin committed a suicide attack in which twenty people were killed in Syria. The terrified German made the wise leadership of ISIS that he wanted to bring his daughter in Germany and hit on the run.

After returning to his hometown Dinslaken he was observed and monitored by the security service. Then he told acquaintances began to tell about his doings in Syria, the police picked him up. Nils D. ISIS is on the hit list. The case against him will last several days.