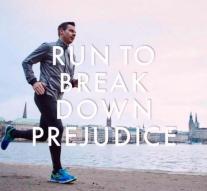 hamburg - For some, going from the couch to the refrigerator already a task for the German runner Markus Kai Xiong's only the moon too far. He presented his final plan Friday for a marathon from Hamburg to Shanghai and will largely follow the Silk Road. The 44-year-old athlete has set itself the goal to complete the journey of at least 12,000 kilometers between the two partner cities in 235 days.

Kai Markus starts on March 12 and runs from Germany through Poland, Belarus, Russia, Kazakhstan, Uzbekistan, Kyrgyzstan to the final destination in China. He has to make himself planned a day seven to ten hours to run and it between 60 and 80 kilometers. After seven to nine stages he takes a rest day to soak up the culture of the region. Super athlete thinks the road to wear thirty or forty pairs of shoes. He is accompanied by a friend in a Volkswagen beetle from 1984, but also continues to run according to the owner.