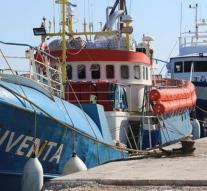 rome - The Italian authorities seized the Iuventa, the ship of the German aid organization 'Jugend Rettet' (JR) on Wednesday. The prosecutor of Trapani in Sicily decided to do so because JR is guilty of promoting illegal immigration. The crew would have taken on board migrants several times, escorted by Libyan smugglers and not in danger.

The laying of the Iuventa's chain is according to the public prosecutor a measure to prevent repetition. 'That there is a definite plan between private organizations and smugglers seems to me at the moment science fiction. '

The boat was searched on Wednesday in Lampedusa harbor. JR spokesperson Titus Molkenbur said that Italians were hoping to find criminal contacts. 'We reject those allegations. We have nothing to hide. '

According to the OM, seizure has nothing to do with the refusal of JR to sign the new code of conduct for rescue operations at sea. The Italian government therefore hopes to better manage the picking up of migrants. This is happening more and more by private ships.