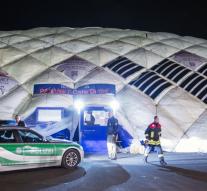 neubiberg - In the German state of Bavaria have seekers Monday experienced anxious moments. The roof of an inflatable hall with 237 refugees in the town of Neubiberg, near Munich, collapsed. This was caused by a technical failure of the heating system. No one was injured.

The more than 200 refugees from the so-called skylight were evacuated and accommodated in a nearby gymnasium. They have to spend the night there. According to the fire department the asylum seekers Tuesday back to their home.

The problem came to light by the smell of gas. When emergency let the air escape was the pressure in the hall way and collapsed the roof down.

Skylights are cheap and quick to set up. Therefore, they are frequently used to bring in among refugees.