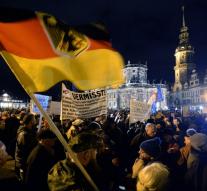 dresden - The prosecutor in Dresden, Germany investigates brought to the gallows in a recent demonstration of anti - Islamism Pegida , has been threatened with death. According to German media, he received anonymous threats by mail that he would be killed. Justice is now investigating who is behind the digital messages.

In the demonstration wore Pegida supporters along gallows . The noose hung laminated sheets of paper on which was written for whom they were reserved : Chancellor Angel Merkel and her deputy Sigmar Gabriel .

In an e- mail to the prosecutor , among other threatened that he would be shot .