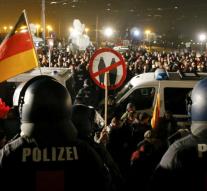 dresden - The German Public Prosecutor's Office is investigating a speech to the German-Turkish writer Akif Pirinççi held a demonstration of the anti-Islam movement Pegida Monday night in Dresden . Pirinççi is suspected of sedition .

The writer expressed himself about immigrant issues. The prosecution is particularly striking about the sense in which Pirinççi says " there are other alternatives, but that the concentration camps are unfortunately out of service ".

In that sense Pirinççi used the word " refugee" or "asylum seeker" is not. Lutz Bachmann, leader of Pegida , speech Pirinççi broke prematurely. " Many people were appalled ", said René Jahn.

He is co-founder of Pegida but moved in January from the movement.