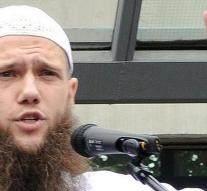 dusseldorf - In Germany, an Islamic preacher arrested for recruiting fighters for a militant group in Syria. Nor would he have bought and supplied military equipment, reported the German justice.

The 35-year-old Sven Lau, who operates in the region of Düsseldorf, probably has two fighters managed to recruit. The suspect is a member of a Salafist group that supports according to the prosecutor the terrorist organization Islamic State.The group operated under the guise of providing humanitarian aid to prevent human suffering. But prosecutor says the Salafi preachers glorify violence and radicalize young men leave.
NEW