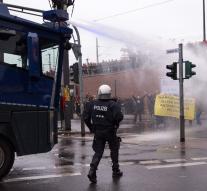 cologne - The German police Sunday in Cologne deployed water cannons against leftist activists who were protesting against a march of about six hundred members of the Hooligans against Salafists (Hogesa). The protesters were about ten thousand men.

The demonstration of Hogesa speakers called on to close the borders and to ban the building of mosques in Germany. The police used water cannons to keep away from the left-wing activists in the radical right.

There were Sunday 3500 agents on the leg in Cologne. Such a gathering of Hogesa ran last year, namely completely out of hand. In the center of town were definitely fifty policemen injured when protesters clashed with police. As a precaution, the activists were expelled from the city Sunday.