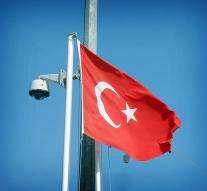 - Germany should no longer provide weapons to NATO partner Turkey. That Jürgen Trittin on Saturday in Istanbul said during the annual parliamentary conference of the military treaty organization. The foreign specialist of the Greens do not want the Turkish army still get material ' which can be used in the fight against its own population. '

' The principle that no ordnance may be in conflict and tension areas, should also apply within NATO, '' said Trittin. ' We are now faced with an ally who is busy breaking down the basic rights of democracy. ''

Trittin argued in the corridors agreement with the German-Turkish politician Pir Ziya. He attends the meeting in the metropolis on the Bosporus as a representative of the pro-Kurdish HDP. Ten MPs from the opposition parties have been arrested, including the leaders Selahattin Demirtas und Figen Yüksekdag.

' We hear a long time that Europe is concerned, '' responded Pir. ' I think the EU is a step further to go and diplomatic statements to convert penalties. '' And he does not immediately think of economic measures but to revise its cooperation with Turkey in the areas of defense and intelligence.