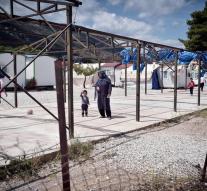 stuttgart - A Syrian refugee must appear in Germany for a possible attack plan. The 20-year-old man at the end of last year tried to cross the border with neighboring Denmark, including kitchen knives, fireworks, batteries and walkie-ticks in his luggage.

The Public Prosecution Service in Stuttgart (Baden-Württemberg) thinks that the man wanted to attack the Danish capital Copenhagen. The Syrian would have been planning to blow an improvised bomb into a crowd, but walked at the border with the lamp. The man stayed in a refugee camp in Germany since 2015.