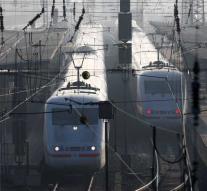 dusseldorf - The German railways, Deutsche Bahn, advise passengers to travel by train on Monday in the western state of North Rhine-Westphalia (NRW). Trade unions have announced 'warning strikes' which, according to the railways, mainly hit NRW, which borders, among other things, our provinces Limburg, Gelderland and Overijssel.

The railways fear that the actions of the railway union EVG will lead to the failure of trains and delays. Travelers who want to travel to or from NRW by train can do this better on Sunday evening or Monday after the strike action.

The EVG has demolished negotiations with the railways on working conditions such as a 7.5 percent wage increase and announced work interruptions. Starting Monday morning at 05. 30. Further details are missing.