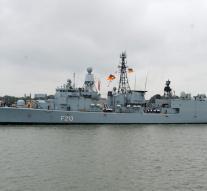 - The German Navy during the Christmas season has reached a milestone in rescuing refugees from the Mediterranean. According to German media, the number of ten thousand was exceeded.

Since the beginning of the participation in the activities on May 7 the German soldiers did the newspaper Die Welt, 10. 528 to lift people out of the water. On Christmas Day plucked the crew of the Berlin off the coast of Libya more than five hundred seekers of three rickety boats which the ten thousand was reached.