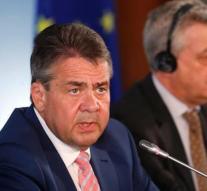 ankara - The German Foreign Minister Sigmar Gabriel goes to Ankara to talk about the invasion of the air force base Incirlik. That's what his Turkish colleague Mevlüt Çavosoglu said on Tuesday. 'We are constantly in touch with Gabriel to solve the problems. He will be personally on Monday. '

Çavusoglu repeated again why the Erdogan government does not want German parliamentarians to visit the 250 men in Incirlik to assist in the fight against IS. 'We still see that Germany is behind everything that is against Turkey. Under these circumstances, we can not open Incirlik. We can reconsider that decision if positive steps are taken. '

Germany is considering withdrawing its troops from Turkey. Government party CDU / CSU wants to wait for Gabriel to reach another way through diplomatic roadmap. Coalition partner SPD planned to set an ultimatum for repatriation of troops on Tuesday, but reportedly with Chancellor Angela Merkel agreed to give Gabriel a chance for a mediation effort.