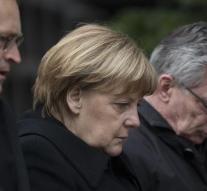 berlin - German Interior Minister Thomas de Maiziere will not have failed German security around the attack on the Christmas market in Berlin on Monday. The services have been criticized because the alleged offender Anis Amri already months earlier in sight was a potential terrorist with plans for attacks.

De Maizière notes in an interview with the newspaper Bild am Sonntag on legal constraints that the security services. ' There are so far no adequate facilities to keep constant watch any danger, '' he says. He announced a thorough investigation and calls it seriously to draw any conclusion that the services have failed.

The attack Monday in which a truck drove up to the busy Christmas came twelve people and were almost fifty people injured. The alleged offender was shot in Milan.