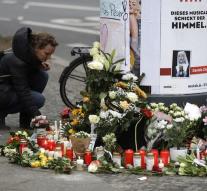 berlin - Eighteen of the 48 people wounded in the attack in Berlin are there serious condition. Interior Minister Thomas de Maiziere said that Tuesday. So far twelve people are deceased. Only a few victims have been identified, said the minister.

Now no doubt the authorities are more fully that there was an attack, says De Maizière. 'The truck was deliberately driven into the crowd. We are dealing with a brutal attack. '

De Maizière confirmed that the man was arrested 'probably' coming from Pakistan and had requested asylum in Germany. His application was still pending. The man does not appear in databases with names of terrorist suspects and the responsibility for the terrorist act has not yet been claimed, said the minister. He also confirmed that the suspect denies any involvement.

The police are still looking for the firearm with which the perpetrator has killed a Polish truck driver.