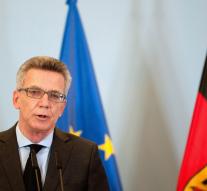 - The attacks were in Paris " barbaric murder ". That said the German Minister Thomas de Maizière of Interior Saturday after an emergency meeting of the government. "Even Germany is still in the crosshairs of international terrorism. "

In the German town of Rosenheim is a man arrested who had possible ties to the bombers in Paris. He was heavily armed and had Paris as a destination set in its navigation system, de Maiziere confirmed Saturday.