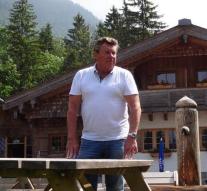 hamburg - A big mystery is the German private detective Josef Resch why the Dutch and German courts have him in their sights because of its MH17 research.

Resch says today in an exclusive interview with De Telegraaf include: 'The US government and German secret service BND called immediately after the attack on the Boeing 777 that pro-Russian separatists were behind the massacre. Then we may assume that the evidence is now lie with the judiciary and the Joint Investigation Team. What the investigators have still with me? '

The detective praised earlier for an unknown client as 47 million dollars for gold tips on the perpetrators. In a report in this newspaper today he tells about his bizarre quest.


A Russian informer 'Otto' Resch gave several secret documents the German private investigator could not determine its authenticity. 'It's in Cyrillic documents which we have translated into German. Whether the documents are true or false, not to say. '

The Telegraph is not responsible for the authenticity and veracity of the documents on this website.

One of them (the first four pages right) is an examination of a Ukrainian officer who stated that on July 17, 2014, the day of the MH17 attack, three Ukrainian fighter pilots in the area were active. Among them, a pilot that is not to be found in the logs.


Two fighters, the report says, were ordered to destroy an aircraft in eastern Ukraine. This 'license to kill mission 'would be implemented as planned and supported by anti-aircraft guns on the ground. Military pilots are left for an unknown destination.

In another document (fifth right) three days after the downing of the passenger plane conclude Ukrainian security officers that no announcements are a Russian convoy with a BUK missile launcher that would be received in the days before the massacre illegally Ukraine.

A letter dated July 28, 2014 (sixth right) to the Ukrainian secret service has the qualification 'very secret, single copy. The piece mounts on to cover up all evidence surrounding the attack on MH17, preventive stashing Army activities that violate the law, arresting citizens eyewitnesses and the transfer of soldiers involved. In particular, also called documents herein about to obfuscate the presence of jets on July 17, 2014.