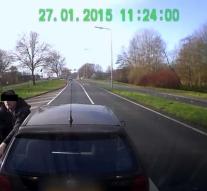 munich - Motorists can not put a camera in Germany in Germany. A judge imposed a fine of 150 euros on it because she was in violation of the privacy of others.

The woman from Munich had to install the front and rear of her car cameras. They filmed in August last year how another car driver damaged her car when parking. The woman walked with the images to the police, but she was persecuted. According to the judge, she violated the privacy of other road users. 'It may not be that all 80 million Germans are walking with cameras to film any situation so that a crime can be solved,' says the verdict.

On a personal violation, Germany has a fine of 300,000 euros. Because the woman earns only 1500 euros a month and because her car has already been damaged, the penalty is much lower.