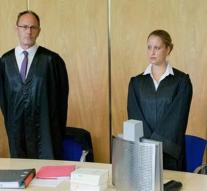 coburg - A mother of eight dead babies has been sentenced by a court in the German city Coburg to fourteen years imprisonment for manslaughter on four of the children. The father, who was tried for complicity, was acquitted, according to German media.

The prosecutor had demanded life against the 45-year-old woman, Andrea G., for four murders. Baby's corpses November last year were discovered in a house in the Bavarian Wallenfels. The woman confessed that she has slain several live-born babies.