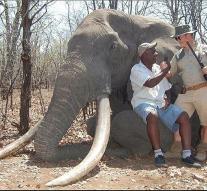 harare - One of the largest elephant ever seen in Zimbabwe , was slain by a German fighter . Barely three months after the world have expressed disgust over the hunting pictures of the slain lion Cecil, the German pose proudly next forty to sixty year old giant. Elephant tusks weighed 54 kilos.

The pachyderm was shot dead on October 8 during a private hunting party in the Gonarezhou National Park in Zimbabwe. The German took part in a hunting expedition of three weeks, in which the goal was to kill the Big Five: elephants, leopards, lions, buffalo and rhinos.

Cost : 53:000 euros. Hunting sites in the world praise the German, who has slain the biggest elephant, according to experts in nearly thirty years.