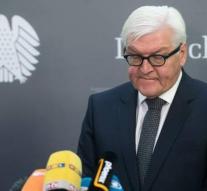 - BERLIJNDe German Foreign Minister Frank-Walter Steinmeier will next week visit to Turkey. This happens at a time when the relationship between the countries is under considerable pressure.

Turkish President Erdogan has accused Germany earlier this month that it supports terrorism by Kurdish organizations such as the PKK or take the mental Fethullah Gulen in protection. Germany criticizes the way Erdogan responds to the failed coup of July 15 with mass dismissals and arrests.

Ankara complained earlier about staying away from major EU politicians after the coup attempt. It is the first time that Steinmeier calling Turkey since the failed coup. It is not known with whom he will hold talks.