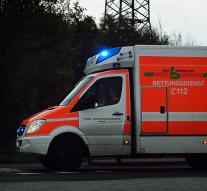 - A 66-year-old German was killed because she was run over by her own car. The cause of the incident Tuesday near the city of Reutlingen (Baden-Württemberg), was a parked van which suddenly went rolling into the sloping street.

The bus collided with the car of the woman. This vehicle was also hit by the move and rode the garden of the victim. The woman was right in the garden and came under her own car up. She died on the spot.

The van also popped yet at the woman's home, causing a loss of at least 60 000, police said.