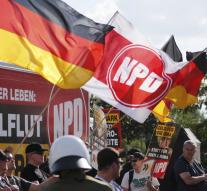 karlsruhe - The German constitutional court will consider a ban on the far-right National Democratic Party (NPD). Thus, the chances are that the party 's neo-Nazi critics, is indeed prohibited.

The sixteen federal states earlier two years ago to ban the NPD, which according to the domestic intelligence " racist, anti-Semitic and revisionist " is.

The Constitutional Court holds hearings in March in the case.