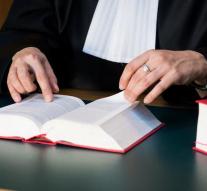 essen - Three people who died in a German bank over a fallen elderly man without worrying about him, have received fines from the court in Essen between 2400 and 3600 euros. The sentenced, two men and a woman, were on their way to a vending machine.

The elderly man of 83 was not just stunned, he had become unwell. The man died a week later in a hospital, reporting local media.

The security camera in the Deutsche Bank branch showed exactly that the man fell and how four people passed over him. According to the court, the fourth customer was unable to appear at the meeting. Only customer number five was taken care of by the elderly. They called an ambulance.

Two guilty men found that the man on the ground was a swagger, who had more school in the bank. The judge rejected that argument.