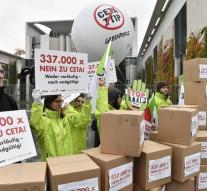 karlsruhe - The German Government must go further with the provisional Ceta FTA between Canada and the European Union. The German Constitutional Court in Karlsruhe on Thursday rejected several objections to the German approval of the agreement, but will bow later deeply about.

The ruling could go on the signing of the treaty on October 27 in Brussels. The German government must have to ensure compliance with certain conditions. For example, a clause should be included that Germany could withdraw from the provisional entry into force if necessary.

Vice-Chancellor and Minister for Economic Affairs Sigmar Gabriel had urgently warned Wednesday against a stop on the signature. This could cause great harm Germany, he said.

After the signing and approval by the European Parliament would Ceta parts provisionally enter into force before the parliaments of the EU Member States vote. According to the complainants would make this violates their democratic rights.