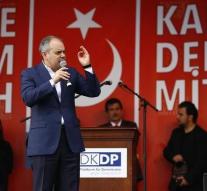 karlsruhe/cologne - The German Constitutional Court has ruled on Friday that the government may prohibit foreign politicians to engage in activities in the Federal Republic. The ruling is a milestone in the fierce debate over the actions of Turkish politicians in Germany in the run-up to a referendum in Turkey.

The court ruled in a lawsuit that citizens can not enforce the ban on speaking to the Turkish politicians, but the government can. There is no automatic right of foreign officials to exercise their functions in Germany, the judges ruled.

The German government says it is not planning to ban expressly Turkish politicians. Freedom of expression is held high in Germany said a government spokeswoman said Friday in a response.

Friday, for example, the Turkish Minister for Sport, Akif Cagatay Kilic, expected at a meeting in Cologne.