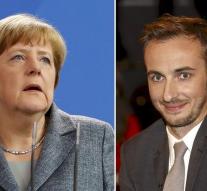 - German television comedian John Böhmermann for the first time responded to the controversy surrounding his Erdogan poem. Böhmermann directs his anger in a interiew with the blade in particular Chancellor Angela Merkel. 'They should not bend when it comes to freedom of expression. But instead she filleted me and saddled with a crazy despot. She makes as a German Ai Wei Wei mine, 'Böhmermann referred to the China denounced human rights activist.

After the fierce debate over its Erdogan poem Böhmermann announced a four-week
TV pause. Also in the Netherlands discussion arose about the long arm of Erdogan, among others after the arrest in Turkey of Metro columnist Ebru Umar. also comedian
Hans Teeuwen joined in the discussion.