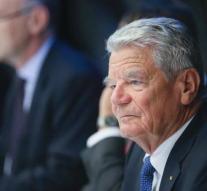 - The leaders of the coalition parties in Germany consultations Sunday about a possible joint candidate for the post of president. The current head of state, Joachim Gauck (76) stops after a period with because he thinks he's too old.

According to German media makes the current Foreign Minister Frank-Walter Steinmeier (SPD), likely as joint candidate to come out on top. The new president is elected on February 12 by a special session of parliament.

If the coalition parties fail to agree, Steinmeier will have to face a candidate to be put forward by the CDU and CSU.