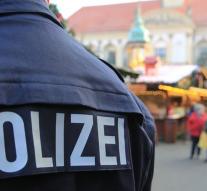 berlin - German cities take extra security measures at their Christmas markets after the attack in Berlin. It is mainly about more police presence. Dresden, large concrete blocks around the Striezelmarkt placed in the center to keep vehicles.

In the City of Brunswick went Monday night immediately after the attack in Berlin for more police officers to the street at the Christmas market. Also in Hanover were tightened security measures, according to German media. Leipzig closes a road through the middle for cars and trams.

The concrete blocks in Dresden are a striking measure. The Striezelmarkt is the oldest Christmas market in Germany and one of the largest.

The interior ministers of the German states have called Christmas markets to continue normal. She spoke out against the closure of such events. Germany has an estimated 2500 Christmas markets, accounting for one billion turnover.